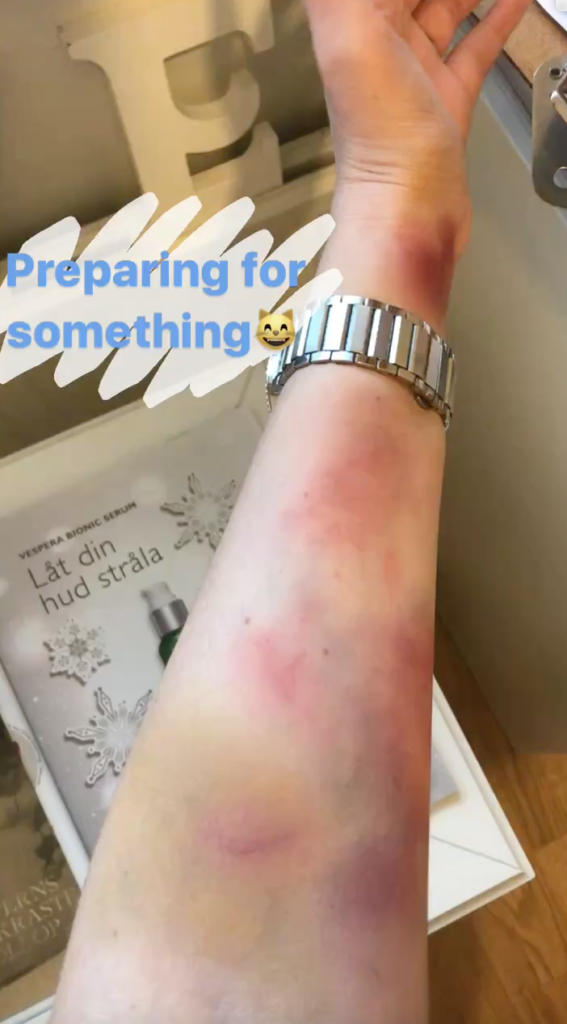 This week didn’t start very well.  A friend told me that she has a serious illness which involved a surgery or two.  Luckily the first surgery was successful and the week started to look brighter.  I got the “go ahead” and finally I can tell you the secret.  The picture above might give you a clue…  If you are wondering about the bruises on my arm… No I was not in a cat fight and neither am I preparing for one either.  Not sure if you know about this, but I share some behind the scenes secrets and things which I am currently busy with as it happens on Instagram.  Just thought it was ironically funny that I happened to have a magazine open, when I was taking this picture, with an advertisement saying “låt din hud stråla” which means “let your skin shine”.  Now you have an idea of my sense of humour and if you read between the lines, I have already given you a few clues 🙂

Here is another clue…

Behind the scenes at Hello Actors on my Instagram stories @miaangelibei

This short clip was a behind the scenes movie that I took when I was at the Hello Actors expo.  Now, I have given away too much clues and might as well say it.  I got a job as Makeup Artist and Hairstylist in a film.  My very first short film movie in Sweden.  I am so excited!  So, I thought I would celebrate it like me and my sister used to do when we were students.  By getting a small bottle of champagne and drinking it through a straw…haha.  My motto is, the bigger the achievement, the bigger the bottle.  This short film will be for students and they will send in their movie to the Stockholm film festival later this year.  My name is going to show at the end of the credits and I am going to do whatever it takes to make the actors and actresses look as good or bad as needed.  How did I find the work, was it through Hello Actors?  No, but it was a website where all the film industry people get together to do networking and to find a work.  If you are looking for a work in the film industry and don’t know where to go yet, you are welcome to send me a direct email and I will tell you more 🙂

The filming process will start in springtime this year and I will post updates here and on Instagram as it happens.  Stay tuned!